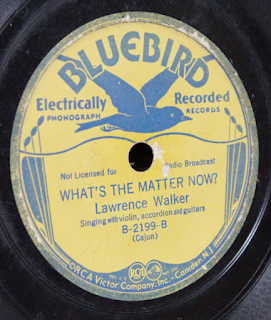 The pre-war Cajun recording era had a surprising set of artists that many rarely consider today.  Accordionist Lawrence Walker, more known for his honky-tonk post-war career, had formed a small group in the late 1920s to bring his mixture of American blues and French music to the surrounding parishes.  As a teenager he formed the Walker Brothers group with his brother Elton. Featuring accordion, fiddle and guitar, the band played both Cajun and hillbilly music.  Soon, they were invited to record for both Brunswick and RCA.   In 1935, Walker waxed a pair of bluesy English compositions at RCA Bluebird's mobile recording facility in New Orleans.2
With guitarists Junior and Aldus "Popeye" Broussard added to the group, their professional sound has been preserved on Bluebird recordings like "What's The Matter Now" (#2199).  The droning guitar strum with simple accordion riffs gave the traditional Cajun sound an added dimension.1   It arrived on the heels of similar recordings of the era, such as the Breaux Brothers' "Le Blues De Petit Chien".

(You) stayed out late last night,

Let me tell you something, baby,

I got up on my mind,

Let me tell you something, baby,

That's keeps me worried all the time.

You got me worried now,

But I won't be worried long.