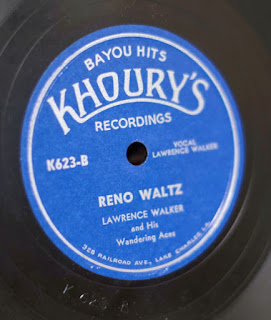 After WWII, several Louisiana labels began recording Cajun music again, most of them locally. One of them was George Khoury, a Turkish-American businessman from Lake Charles and record store owner. He would record the earliest music by Lawrence Walker, who would have two hits with Khoury, "Evangeline Waltz" and "Reno Waltz" (#623) in the 1950s.   The original tune, "La Valse de la Grande Chenier" also inspired "T'es Petite et T'es Mignonne" and Lionel Cormier's "Welcome Club Waltz".

His first band, Walker Brothers, consisted of himself on either accordion or violin and his brother Elton on violin. In 1929, they would record for Brunswick in Dallas and in 1935, record for Bluebird (later Montgomery Ward) in New Orleans. He appeared at the National Folk Festival in Dallas in 1936.

However, Lawrence is credited by many for developing what came to be called "new style" Cajun music in the 1950s. Walker's father, Allen, was a popular fiddler and introduced Walker to Cajun music.   A demanding bandleader, he tightened arrangements and smoothed the sound of his Wandering Aces, especially reducing the syncopation in his own accordion style. Walker was a perfectionist, who relentlessly drove his band to higher standards.  He would eventually initiate contact with the record-men of the area, certain of his ability to sell records.  He would record Reno Waltz again in 1961 for La Louisiane, however, this time he used different lyrics and replaced the steel guitar with a smooth dueling fiddle ride.


In Cajun French, the verb "jongler" is a mysterious, old French word and seems to translate as "to think" or "reminiscence".   Reno was named after the Reno Dance Hall located between the towns of Kaplan and Gueydan in Louisiana. It was based on an older tune, "La Valse de Grand Chenier". Lawrence had gotten into a "spat" with the club owner Arestille "Dado" Seaux.  In order to make peace and have a chance to continue playing there, Walker named the song after the club.  Walker who grew up in Texas, would play both country and Cajun music in dancehalls across south Louisiana. Walker also recorded "Allons Rock N Roll", the first Cajun rock n roll tune, which he sung in English.   His popularity gained him the moniker "King of the Dancehalls".

That's the place that I want to die

In the arms of my loved one

I ask your forgiveness for what I've done

I'd even agree to go away forever

When I will die

I want you to come

Close my eyes for me, little baby

For me, i'm going away forever,

You know, it makes me sad

For I'm in love

Later he would record for Swallow Records. After Lawrence died unexpedly of heart failure, his fiddler, Lionel Leleux requested his friend Don Montoucet to fill in for the rest of their musical engagements.  Uneasy about filling in, Lionel just told him:


Oh don't worry about a thing.  Just do it like old Lawrence used to and everything will be just fine.

In 2014, the University of Louisiana at Lafayette and LouisianaDancehalls.com posted a rare 1950s film of people dancing at the Reno Club.