"Mon Coeur T'Appelle (My Heart Aches For You)" - Cleoma Breaux 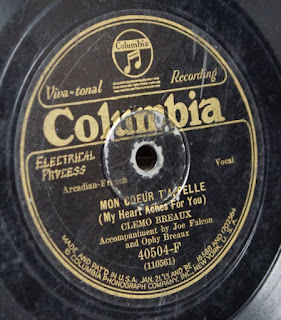 It's one of the most enduring of the Cajun waltzes.  Also known as "J’ai Passe Devant Ta Porte" or "I Passed In Front Of Your Door", it’s a sad song about the passing of one’s true love. This waltz is part of the canon of Cajun music, sung by probably every musician in Louisiana at some point. Often the first song learned by beginning Cajun accordionists, it is also often the first song forgotten by accomplished musicians. Author Raymond Francois says this is an old song and claims his father remembered it from when the Titanic sunk around 1912.6

The success of the Falcon-Breaux recordings led the Columbia agents to invite Joe and Cleoma to record again.  With her brother Ophy on fiddle and her soon-to-be husband Joe on accordion, Cleoma (misspelled Clemo) and company traveled to Atlanta, GA in 1929 for a recording session with Columbia/Okeh.  Next to "Ma Blonde Est Partie", "Mon Coeur T'Appelle" (#40504) would be one of Cleoma's most iconic recordings.

I passed in front of your door


I cried, "Goodbye, my beautiful girl."


Yet no one responded.


Oh, how my heart aches!

Then I took a closer look,


And I saw little lights lit,


And something told me I was going to cry,


Oh, how my heart aches!

I knocked again at the door,


and when they opened it,


I saw the (devotional) candles lit,

It tells of the suddenness of death from accident and disease. The singer tells of passing by his beloved's door and hearing no answer to his call. Going inside he sees the candles burning around his love's corpse.  According to French Canadian writer, James LaForest:


This song has transcended regional appeal and is known throughout North America. I can believe it and understand why. It’s a lovely, very traditional tune that tells a simple story of lost love. The sound of true ‘country’ music resonates the same in French as in English, the same in Louisiana or Quebec as in Tennessee. It is a song that I feel I actually play, rather than just practice. For me that is a sign of success, no matter how competently I perform it.

As mentioned before in other articles, "yaille" is a word that doesn't translate well or at all.  In this context, it's definitely a cry of sorrow.  It's possible the song's melody is older since it also influenced Amede Ardoin's "Oberlin" melody recorded in 1934. In 1934, Alan Lomax recorded the song during field sessions with Eraste Vidrine, Hart Perrodin, and Hosea Phillips.  Dr. Barry Ancelet mentioned it may be based on a Spanish concerto for classical guitar.  Ancelet states: 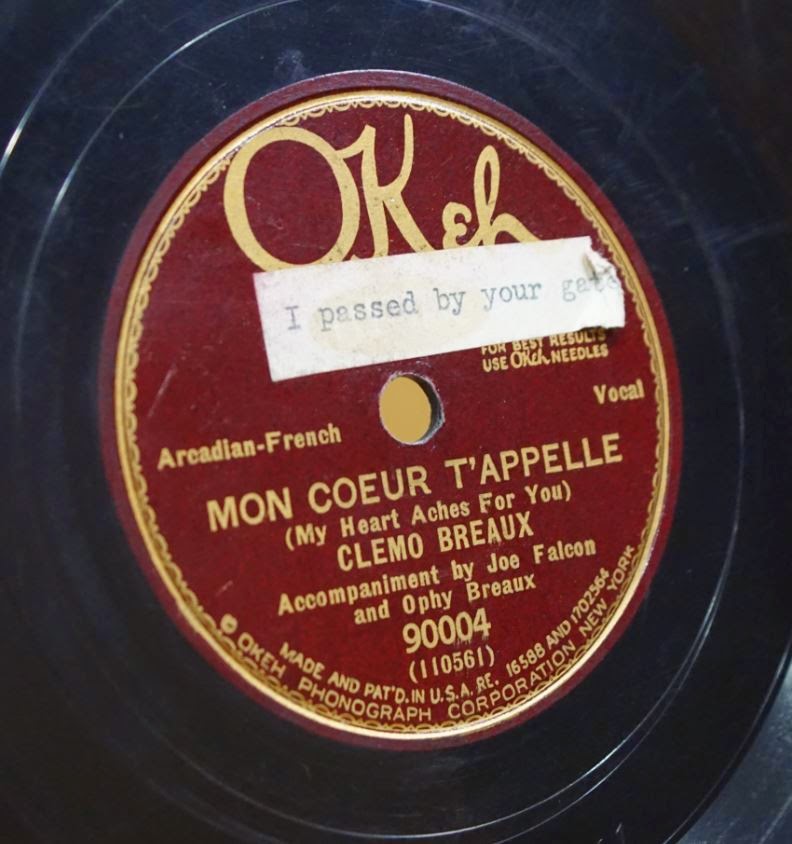 Anecdotal evidence suggests a link with an eigtheenth-century composition for guitar, written by either Frederico Moretti or Fernando Sor, the best-known classical guitarist of his day. Both Moretti and So wrote introductory methods for guitar, and we might speculate that the melody of "J'ai passe" was written for the very same function it fulfills to this day.


By 1946, Happy Fats and Doc Guidry would cover a country swing version as "Setre Chandelle" for J.D. Miller's Fais Do Do records and the following year, Harry Choates would do the same for Jimmy Mercer's Cajun Classics entitled "Je Pasa Durvant'Ta Port (I'll Pass In Front Of Your Door)".  Not to be outdone, Eddie Shuler used George Khoury's label and recorded a country version as "J’ai Passee Devant" in 1952.

The Balfas would record the song "J’ai passé devant ta porte" in the 1960s and would be popularized by many musicians afterwards.  It's considered one of the most popular songs of all time.  It can be found in many sheet music books such as in Gary Dahl's "Louisiana Cajun Classics for Piano Accordion", Nancy Simon's "Ez-Play Cajun Tunes for Piano" and Larry McCabe's "101 Easy Fingerstyle Guitar Solos".  In 2011, it was performed as a symphony piece at the University of Nevada in Las Vegas as part of a tribute to Col. John Bourgeois, Director Emeritus of the United States Marine Band.   It's also listed as one of Gary Lynn Ferguson's "32,000 Popular Songs in Collections, 1854-1992".