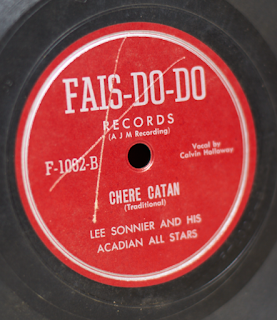 Accordionist Lee Sonnier and his contemporaries were attuned to, and profoundly affected by, the ever-changing musical landscape that sustained their art.  They were not only products of their environment, but also cultural actors who intervened by adapting the diatonic accordion into a Cajun swing framework, a context they knew intimately well.1 But it would take his son-in-law JD Miller to bring him into the studio to shine.

Before Miller married into the Sonnier family, he had been a musician himself.  When Miller was 11 years of age, he played in the grade school band and his interest in music was born.  At the age of 15 Miller joined the Crowley High School band as a drummer. He recalled,


That band was the only formal music training I ever got, and I didn't pay any attention to the instructor even then.  I just played!3

During his high school days, he began writing songs.  Though this period, he wrote 95 songs, but being convinced that they were not good, he destroyed them all and temporarily put the thought of a musical career behind him.2  However, by the 1930s, Miller was invited by steel guitarist Papa Cairo, and fiddler Irby Thibodeaux to form the band called Daylight Creepers.  J.D. Miller states:

You think the names of bands are strange now.  We used to play at night and it seemed that almost every time the old car we used broke down.  We'd have to push that car back home during the day and that's how we came up with the name.1

Little everything, what you've done, dearie,

Yeah, when I saw you there, little girl,

You were listening (to me), naughty woman.

By 1946, he was no longer in a band.  Instead, Miller gathered Sonnier's group into his new recording studio at M&S Electrical shop around 1948 and using a tape recorder, listened to Lee's band record a traditional tune called "Chere Catan" (#1002) with Calvin Holloway as vocalist, Lawrence "Blackie" Fruge on fiddle, Eula Mae Fruge on guitar, and Happy Fats on bass.  Sadly, Miller struggled with balancing the instruments and Calvin's vocals are hardly heard over the volume of Lee's accordion.