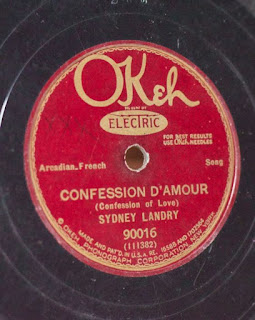 Sydney Landry was one of the last Cajun recording artists of the pre-Depression era.    Better known as "Syd", the Landry's grew up in the small community of Henry, Louisiana outside of Erath.  He started in music when he was nine years old as a drummer, like his dad Louis Landry, who played for local dances. Sydney often entertained friends singing with his guitar.

Sydney's family moved westward to Ged, Louisiana in Calcaseiu parish. There, he worked alongside Lawrence Walker's band.  By 1929, Columbia records offered him a chance to record two songs in New Orleans, one which was a Jimmie Rodgers-style recording entitled "Confession D'Amour" (#40516), later co-pressed by Okeh. He arrived in early December along with Amede Ardoin, the Segura Brothers, and Didier Hebert.

Well, it is time for me to move on, without you,

All of that I learned about* me and you,

All the languor I have spent trying to make you love me,

Have to sit, every day, forgetting (that) you never wanted to love me.

I took my pistol, one day, and I left to go shoot myself,

But, when I though about my promise, I had to move on,

I have all of my clothes in my trunk, with my heart that aches,

With the idea of just leaving, well, to go far into the darkness. 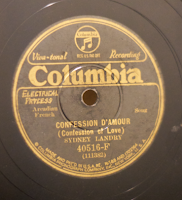 Sydney moved to Texas, living in different areas of southeast part of the state, until finally retiring in Columbus, Texas.   Sydney's recordings remained obscure and his music career never materialized.  According to his son Grady,

"He had a very bad automobile accident in the 30's. He lost his voice and ended up breaking all his records."1