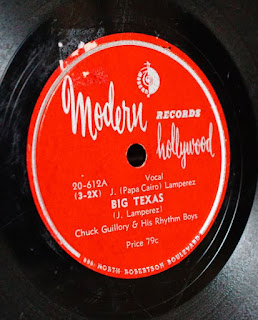 The story of "Big Texas" and "Jambalaya" has been covered before, however, it's history makes a good story.  The first recording of this melody as a Cajun tune was by the Guidry Brothers called "Le Garcon Negligent" in 1929.  Between 1934 and 1940, the melody influenced songs such as the Breaux Brother's "La Valse De Bayou Plaquemine", Cleoma Breaux's "Pin Solitaire", J.B. Fusilier's "Lake Arthur Waltz" and "Pine Island", Happy Fats' "Gran Prairie" with Harry Choates on fiddle, Jolly Boys' song "Abbeville", and a song called "Allons Kooche Kooche" by the Louisiana Rounders.  As Jules Angelle "Papa Cairo" Lamperez re-entered the music scene after the war, he couldn't forget the melody he used on the Louisiana Rounders song. Cairo was determined to remake it into a popular tune outside of Louisiana and Texas.

Since Cairo's instrument was less in demand in Cajun music than the fiddle or accordion, he also branched into steel-happy institutions such as Western swing and country, appearing for a time as a sideman to Texas honky tonker Ernest Tubb. Cairo practically lived on the stages of dancehalls and saloons in the '40s and '50s, when artists such as Guillory and Leroy "Happy Fats" LeBlanc were riding high.  He also fronted his own units such as a Port Arthur-based Western swing unit that, for a time anyway, featured a vocalist named George Jones, who would go on to become one of country music's biggest stars.  Not long before 1947, Murphy "Chuck" Guillory had decided to add Julius "Papa Cairo" Lamperez to his lineup of musicians.  By 1948, he had Chuck's band perform the melody and gave it the title "Big Texas" (#612), (sometimes listed to as "Gran' Texas".)   It was pressed on a shellac "red label" and later on a lighter vinyl "blue label".

Modern records had spotted Chuck's band playing Eunice and had them record it locally, probably in New Orleans.  The producer had it pressed in California on the Bihari brother's label: Modern Records Hollywood.  The group consisted of Jimmy Newman on some vocals, Papa Cairo on other vocals and steel guitar, Claude "Pete" Duhon or Howard Thibodeaux on bass guitar, Curzey Roy on drums, Chuck Guillory on fiddle and Herman Durbin on piano. Since Lamperez was the vocalist, Chuck and the Biharis had him listed in the credits as the song's author. 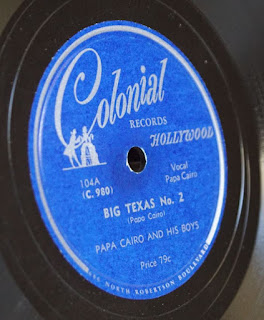 Noone knows for sure which pre-war recording influenced Papa's melody for the song, but he did write his own version of the lyrics. He took the melody of the Breaux's slow waltz and picked up the pace into a swingy two-step shuffle.  "Big Texas" was a catchy song about a rejected lover starting a new life in the distant land of adventure and the great unknown...big Texas. Given the song was sung in French, he knew the song's success would be limited. 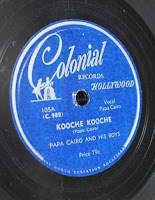 In 1949, he decided to record the song in English with his own group and entitled it "Big Texas #2" (#104), following it up with his original, pre-war French version simply called "Kooche Kooche" (#105).  By this time, both were released on Modern's subsidiary label called Colonial.  Papa Cairo and his Boys consisted of Don Lane on xylophone, Murphy Smith on fiddle, Herman Durbin on piano, Albert Roy on guitar, possibly Pete Duhon on bass and Curly Mertz on percussion.  Later, he would add fiddle player, Rufus Thibodeaux, who would later go on to perform in Nashville.

You left and went away to Grand Texas,


You left and went away to Grand Texas,


You left and went away to Grand Texas.

By 1950, Modern had sold it's Hollywood pressery to Mercury Records, ending their Cajun music pressings. After a couple of years, and still unsure of the song's success, he went back; this time into J.D. Miller's studio in Crowley in 1951 and re-recorded the song twice, once in English and once in French (#1049) for Feature Records. 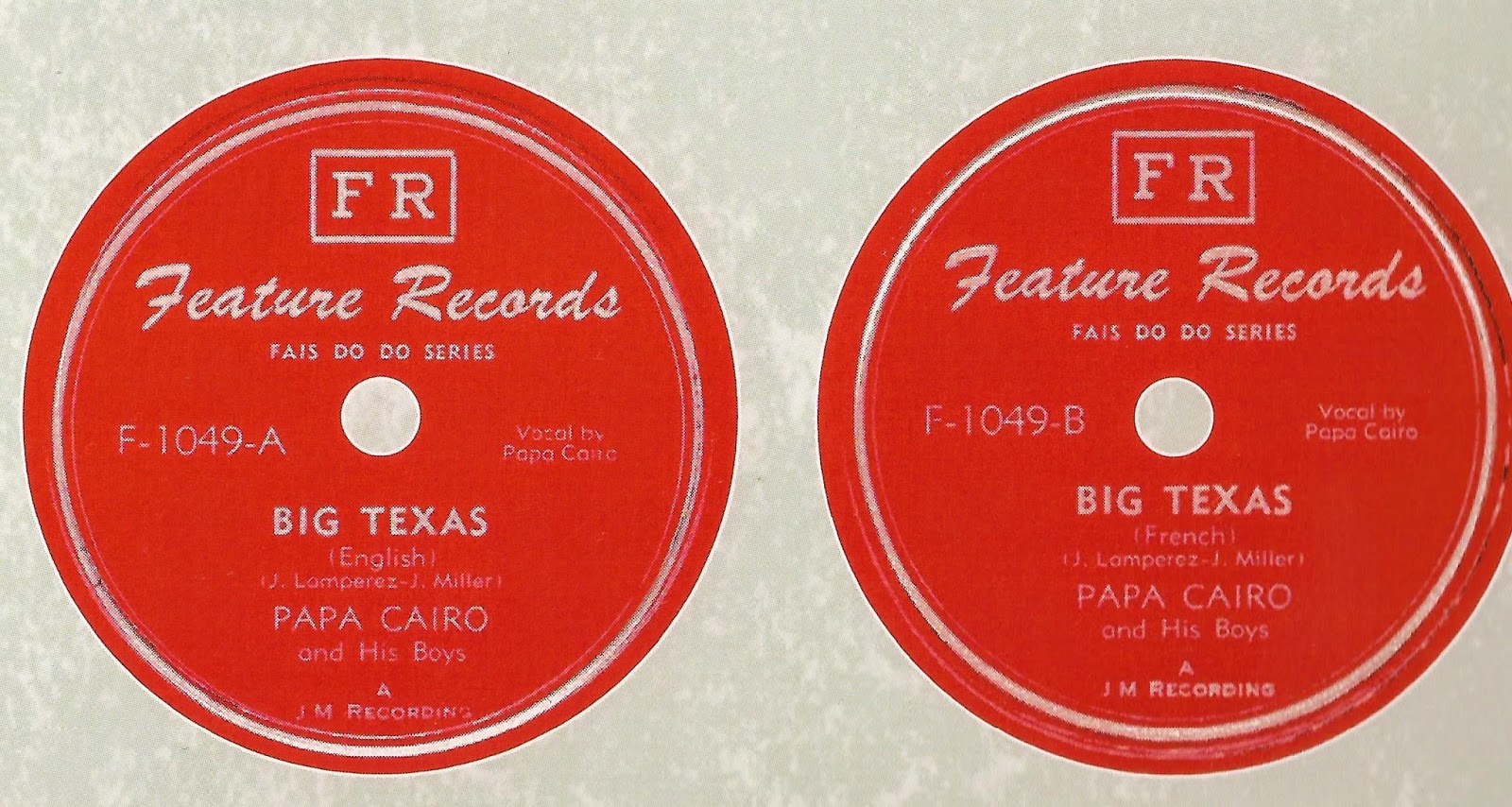 By 1952, country star Hank Williams was already able to boast six top hits in the country charts and seven million seller, before it came to the recording of "Jambalaya (On the Bayou)". Hank Williams, however, did not use the more mundane text of the original, but he is said to have written the interspersed with dishes of Cajun French words and text together with the non-copyrighted version (#1106) registered with Aubrey Wilson “Moon” Mullican.

Moon Mullican had already been familiar with the tune, travelling with his band, The Showboys, around east Texas and Louisiana.  He had already recorded "New Jole Blon" however, as the story goes, he fought with his record label, King Records.   That's when King chose to give Hank the song to record as his own, possibly paying Mullican on the side.  Although Moon's not listed on the credits, he claims he got 50% of the royalties.  However, according to author Colin Escott, in the book "Snapshots from the Lost Highway", Big Bill Lister said Moon Mullican and Hank Williams composed "Jambalaya" together while traveling in Hank's limo on the way to a show in Louisiana and that Don Helms (Hank's steel player) wrote the words down.  Lister said:

"We stopped and Don Helms got a sheet of cardboard and Hank and Moon banged that thing back and forth, and Don wrote it down."3

Other rumors abound.  One particular rumor states Moon wrote it for Hank and gave it to him.  Another claims Moon had nothing to do with the song, in which members of Dudley Leblanc's Hadacol Caravan claimed to be the genuine architects of the anthem.  According to author Ryan Brasseaux, Williams supposedly devised lyrics to his Cajun anthem while en route between Caravan shows in a train dining car with Dudley's son Roland, George Dupuis, and Lafayette entrepreneur George Berry. Roland provided the Cajun lyrics and Cajun surnames as the men drank whiskey.2  Finally, it has been written Happy Fats, who had recorded "Gran Prairie" and played on the same billing as Hank at the Hayride, helped Hank compose the song.11  They were both known to have worked together, even getting Happy's good friend, Joe Pusateri, to help write Hank's biography.12  According to author Hubert Bauch, bass player George Belote played with Happy Fats for a short period of time. As the tale went, on a tour of Louisiana, Hank asked Happy Fats what there was to eat the first time he came down to bayou land, and Fats immortally said, "Well, we's got jambalaya, crawfish pie, file gumbo..."14

However, the most endearing story that the family has known was told to his granddaughter Joyce McGee:


When I was a child and visiting my grandparents farm, I remember Papa Cairo and His boys coming over for a visit one night. He was very upset because he said Hank Williams had stolen his song and recorded it. He said Hank Williams had previously come in a bar they were playing at. Papa Cairo had written Jambalaya and his band played and sang it that night Hank Williams sat through their performance and said how much he liked it. Then later he heard it on the radio.13

Papa Cairo immediately claimed that Williams had stolen the song, because the label identifies him as the sole composer.  Afterwards, feeling jaded, he vowed to never record again.  Marty Robbins, who played in Papa Cairo's group, knew all their material.  By 1954, realizing Papa walked away from recording all together, Cairo alleged that Robbins pilfered a number he had written for the Rhythm Boys. Cairo claims that Robbins made up his own version of "You Just Wait and See" into his hit song "Pretty Words". 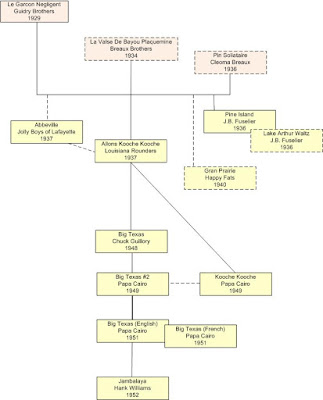